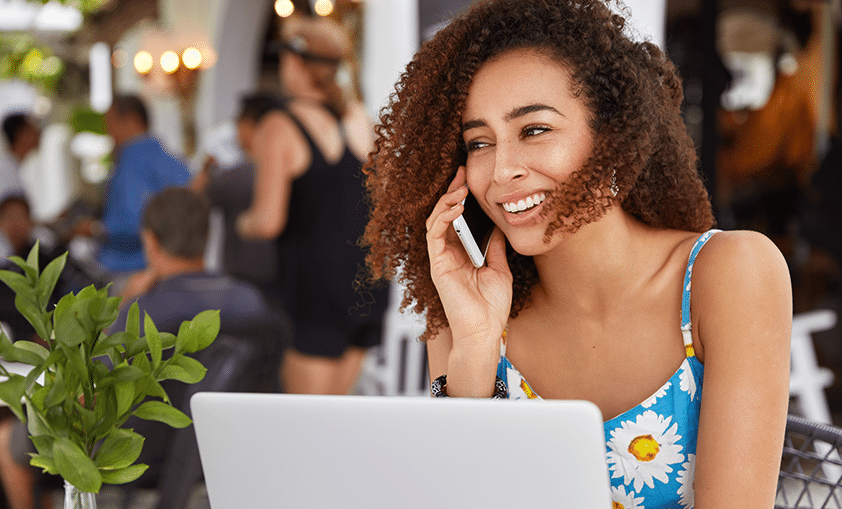 Before I met my boyfriend, I was on four different dating apps or online platforms. I was not doing this because I was desperate or had this “need” to be in a romantic relationship. I realized if I wanted to meet and date a good man, I had to consistently put myself out there in the dating world and practice dating by going on dates. In my case, that meant lots of dates with different men.

As a single Catholic woman, online dating has had its shares of highs and lows for me. I’ve had some great dates and some less than great dates. Along the way, one thing I learned was how to navigate messaging multiple men and go on dates with different people. Believe it or not, there’s a way to handle talking to multiple people online at one time with grace and class.

When I first began to be more intentional in my dating practices, I felt uncomfortable with the idea of talking to different people. Casually going out with several men at a time made me feel like I was being dishonest (or doing something wrong!).

In time, I realized that while it may feel uncomfortable, it is actually good and healthy to talk to several people online at the same time. This is part of the dating process. It’s about connecting with people and going out with them to see if you’re a good fit. In time, one certain person will stand out from the others.

So what does it look like to be talking to more than one person while online dating ? How can you do this with class, grace, and respect to the other single Catholic men or women you’re getting to know? Here are a few things that guided me when I was getting to know multiple people.

Give everyone a chance

Be open and give people a chance. If I felt comfortable continuing to get to know a man and I didn’t see any red flags, I was open to a date or two. The best relationships I’ve been in were the ones that came as a surprise to me.

You might look at someone’s profile or pictures and think “No, he/she is not my type. I don’t think we’d hit off. I am not sure if I am interested or want to invest time in this relationship.” But how do you know if someone isn’t for you unless meet them and get to know them better?

Get to know someone and go on a few dates before deciding if he or she is not for you. Be willing to give people a chance, you just might be pleasantly surprised. You’ll also discover more about yourself and what you’re looking for in a romantic relationship in the process.

Keep an eye on your attachments

I sometimes get emotionally swept up into the ideas that I make up about a man I am getting to know. The next thing I know, I’m overthinking it all and spending too much time thinking about him and where we are going. Not only is that is anything but healthy for me, and also can push away good men.

In my Catholic dating journey, I’ve learned from my friends who are dating and/or life coaches. They have shared principles with me they use with their coaching clients. One of the most important things I have learned is that sometimes women lean forward too much with men, all without realizing it. I realized sometimes in my excitement or eagerness to continue to get to know someone, I would lean forward a bit too much where eventually it led to the man pulling away.

Sometimes life has us learn lessons the hard way and eventually I came to understand what I was doing.

When you’re talking to multiple people at a time, be intentional about not becoming attached to one person too quickly. This frees you up to enjoy dating more and also focusing on your own life. Eventually, one person comes to the front and you’ll want to stop dating multiple people. But when you’re in that casual season of getting to know different people online, take it slow. Trust me. Learn from my mistakes in this department!

Let someone know when you move forward with someone else

I have had this situation happen a few times to me: I’m messaging a guy who usually lives far away. Maybe we’ve talked on the phone once or twice. But a few weeks into connecting, he lets me know he has enjoyed getting to know me but is moving forward with pursuing another woman. In the moment, this stings a little. None of us like rejection. However, I have always appreciated when men handle this sticky situation well because it is upfront and honest. I don’t lead others on, and I don’t want to be led on by the guys I’m talking to online.

What do you do with the other couple of men or women you are talking with when you’re ready to get serious with one person? You need to be honest, truthful, and kind in letting the others know. Don’t play games with other people. And don’t just ghost someone, ever!

More than likely, those conversations are going to be a bit uncomfortable. But resolve to be clear in the way you communicate. Online dating doesn’t have to come with all these mind games and unkind ways of behaving. Remember how you would want someone to treat you, and then do your best.

You can be a faithful Catholic and utilize online dating as a tool to get to know multiple people at the same time. Online dating requires equal parts intentionality and putting yourself out there. It might feel a little overwhelming to wonder about talking to multiple people at a time. However, you can handle it and do so with grace.

Open yourself up to the possibilities and show up as your authentic, true self.

How have you handled talking to multiple people at a time on dating sites?