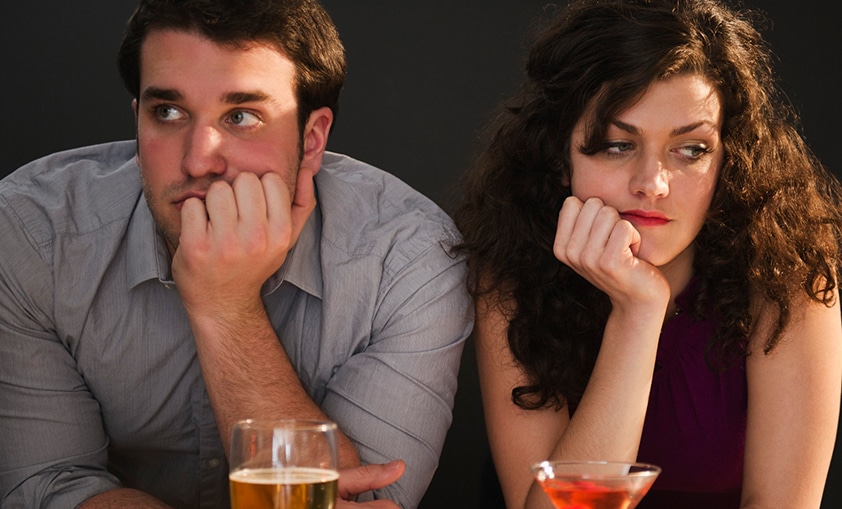 I think the current cultural and political climate in our nation over the past few years (and especially the past few months) illustrates perfectly just how possible it is for good people to disagree on important issues.

And a lot of times, I think we tend to fall into the trap of assuming that good Catholics are on the same side of all the important issues out there. But it turns out, that’s not actually the case.

Some of us love President Trump. Some of us think he’s absolutely terrible. And a lot of us fall somewhere in between.

Some of us say you’ll have to kill me before you take away my right to carry a gun and defend myself with it. Some of us say let’s just outlaw them all right now. And lots of us fall in between.

In everyday life, I think most of us have at least a bit of experience running into these types of disagreements, often even with people we expected to agree with. But when this happens on a first date, things can get a little more complicated.

So here are some ideas for how to handle a potentially sticky situation if you discover that you and your date are at opposite ends of an important issue.

How Important an Issue is it?

All of us have certain things that we feel very strongly about. Sometimes with good reason, sometimes not.

So if the person you’re sitting across from expresses an opinion in complete disagreement with something you hold dear, the first thing you should ask yourself is how important the issue really is.

For a lot of us, things that would make the “extremely important” list are things like the basic teachings of Catholicism. If your date is expressing that he or she disagrees strongly with Church teaching, it might be a red flag that things won’t work out that splendidly with them in the long run.

Is that always the case with disagreements on Church teaching? No, of course not. We probably can all think of mixed-religion couples that work. But at the same time, when the disagreement is about the Faith, know that it’s not going to be an easy hurdle to get over.

Apart from disagreements on Church teaching, a lot of other disagreements are probably things that can be dealt with fairly easily for most people. But not always. Some of us do have certain loves and passions that just don’t jive with others.

For example, if you absolutely love hunting and you discover that your date is a PETA-loving vegetarian, it might be a recipe for disaster.

The key here, though, is to ask yourself whether the topic you disagree on is really as important in the grand scheme of things as your gut reaction said it was.

If you decide that this issue you and your date are at odds over is indeed a very important one, there are a few things you can do. But the important thing is to keep charity in the forefront.

If it sounds to you like the person said something that is just downright insane, try not to jump to conclusions. Maybe their opinion came out wrong — nerves have been known to do that! So first try asking for clarification, or ask some follow up questions to make sure you understand exactly what they meant.

Maybe you did hear right, and they meant exactly what they said. Okay, now what? Well, don’t be hasty. Give it some thought. Even excuse yourself for a bathroom trip or something if you need a moment to think.

And if you think it through and do decide this opinion will make a good relationship with the person impossible, still don’t forget charity. This person is a child of God and deserves respect.

The best route to take is honesty. Let the person know that this issue is so dear to your heart that you don’t see things working out between the two of you. But don’t put the blame on them or make it sound like you think they’re crazy. Remember the golden rule and don’t treat them in a less respectful manner than they deserve.

When It’s Not so Important, but Still Awkward

Sometimes, the thing you and your date are disagreeing on isn’t something of life-altering importance. It could be something simple like you have both think different genres of movies are the absolute worst. Or it could be a more significant topic that you don’t feel extremely passionate about.

Either way, it can still be awkward to find you disagree with someone when you’re trying to get to know them. The best course here might be to “agree to disagree,” as people often say. There’s no real need to keep talking about the controversial issue if it’s obvious that you’re on different sides. No one needs to win the argument — save that for if the relationship goes somewhere!

So try changing the subject, or even be direct about it and say that you don’t think the two of you are likely to agree on it right now. As long as the issue isn’t a dealbreaker for your date, either, this will probably keep the awkwardness out and keep the conversation friendly.

A lot of us like to be right all the time (guilty!). But when you’re just beginning to get to know someone, it’s best to try and put that desire aside.

Obviously, there are some areas of disagreement that you’ll recognize immediately as absolute dealbreakers. But most of the time, agreeing to disagree is the most appropriate response to keep the get-to-know-you flowing and to stay open to the possibility of a beautiful relationship.