With all our fasting, confessing, and contemplative prayer, we Catholics have made a name for ourselves as a somber group. Have you ever heard of good ole “Catholic guilt”? Then you can see my point.

But God never said, “Thou shalt not laugh.” In fact, Job 8:21 says, “He will yet fill your mouth with laughter.” So take a minute to enjoy through this list and put on a joyful heart. As St. Ignatius of Loyola said, “Laugh and grow strong.” 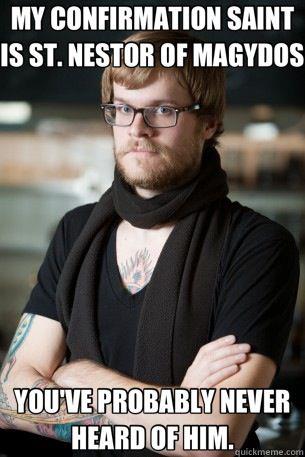 Hipster Barista must have dug deep to unearth this confirmation saint. I have eight years of Theology under my belt, and I’ve never heard of St. Nestor. For the record, St. Nestor of Magydos was a bishop who lived in the second century A.D. He was arrested and killed by local authorities when he refused to makes sacrifices to idols.

He’s a shining example of bravery in the face of imminent danger. Despite being somewhat obscure, St. Nestor would make a great patron saint!

2. I Found That Humerus 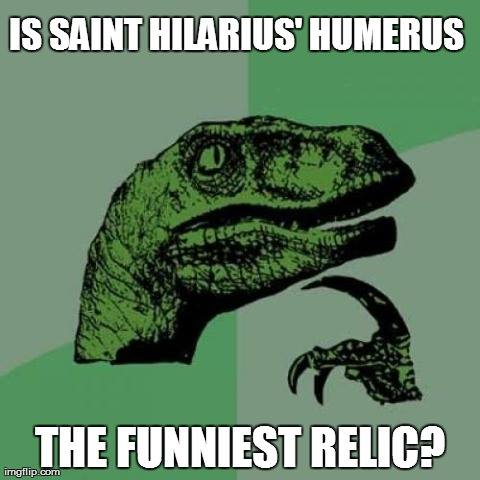 Truth be told, St. Hilarius’s story is a bit dull, although his upper arm bone might peak the interest of Catholic pilgrims in Rome. St. Hilarius served as Pope from 461 to 468. He spent most of that time building churches and libraries, and breaking up squabbles amongst the bishops.

Despite having died nearly 1600 years ago, St. Hilarius’s burial place is known. So if you fancy a visit to Rome to venerate St. Hilarius’s humerus, stop by the Basilica of Saint Lawrence Outside the Walls. Can we all just take a minute to appreciate that look of suspicion? Gets me every time! Here’s a little refresher on Church history, in case you didn’t get the punchline. The infamous Martin Luther made a bold move in the 16th century when he nailed a list of 95 issues to the door of his local church. His purpose was to call for much needed reform in the Church. Instead, he started a rebellion which led to the creation of a separate line of Christian ideology which we now know as Protestantism.

As part of this reformation, he removed the books of the bible that supported doctrine that he didn’t fully agree with. For example, he removed the second book of Maccabees, which supports the doctrine of purgatory. Don’t worry, Pope Francis has his eye out for heretics. Ain’t nobody getting past this papa!

4. How To Pick Up Holy Honies There’s nothing like a holy heart throb who knows how to appeal to your pious side. Dating during Lent doesn’t have to be a drag. Embrace the Church’s guidelines for fasting and go out for a shared appetizer.

Even better, hit up daily mass and enjoy a walk together. Your tummies might be grumbly, but spending time together will help the fast pass more quickly, and you can consider that grumbling a joyful noise unto the Lord! I don’t know whether this meme deserves a laugh or a groan. We Catholics get a lot of flack for having oodles of babies, but let’s be honest. We love life! We came from a creator who is life itself and He programmed us to value and desire the power of creation. To be real, it’s mind-blowing that he shared that power with us. So excuse us for putting it to use!

Besides, how cute are all those tiny babies snoozing through communion at mass? Just take a hint from Overly Attached Girlfriend and relax your timeline a little. Dating is fun, so enjoy your time getting to know each other. Marriage and kiddos will come when the time is right. Talk about a miscommunication. Many protestants feel totally freaked when they hear that we consume the body and blood of Christ. If someone were to accuse us of cannibalism…well it, wouldn’t be the first time. But Jesus was pretty clear when he laid out his plans for the mass. In Matthew 26, Jesus says, “Take and eat, this is my body,” and “Drink from it all of you. This is my blood of the covenant.” That’s why we’re so particular about our bread and wine, because in the mass they become the true body and blood of God! I bet the apostles didn’t see that coming! 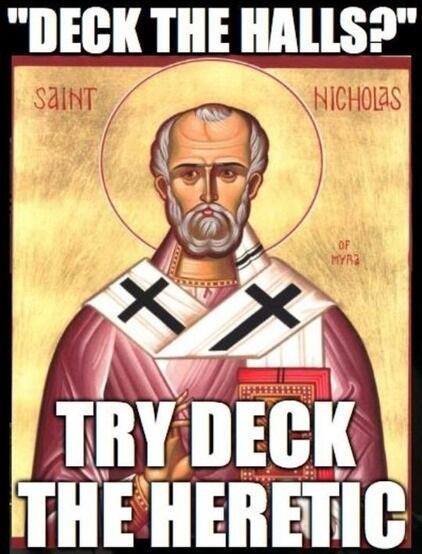 We tend to view St. Nicholas as a joyful, passive, pleasant old man. In reality, he was a total badass. St. Nick was raised by holy parents who died young and left their fortune to their son. Our traditional idea of Santa comes from the time when St. Nicholas tossed bags of golden coins through a poor family’s window. In doing so, St. Nicholas funded the daughter’s dowries so they wouldn’t be condemned to a life of prostitution.

Later in life, he became a priest, then a bishop. He stirred things up at the local temple by condemning false gods. He was arrested and tortured and finally released. Many years later, he attended the council of Nicea and got in a heated debate with the heretic Arius. The debate ended abruptly when St. Nicholas punched Arius out in one blow, or so the story says. This brings a whole new meaning to, “So be good for goodness sake.”

8. Trading in Selfies for Silence How cool are these guys? The Carthusians are an order of monks that are awesome beyond all reason. Here’s why:

Instead of following the Kardashians, consider following these holy guys. To start, check out the documentary Into Great Silence. The breathtaking cinematography will give you a true taste of monastic life, and leave you feeling perfectly at peace. This meme just cracks me up! I know, I know… So what does Matthew 11:30 have to do with breakfast? The verse says, “For my yoke is easy and my burden is light.” Jesus is talking about his way of living. He compares it to a yoke, or harness that binds you to him. He has promised that loving others and following His word will be simple work compared to trying to navigate the world alone.

In short, this verse isn’t about egg yolks. It’s about following Christ. But kudos to the person who found a way to relate a famous parable to over-easy eggs. Afterall, everyone loves a good…yoke. Get it? Poor Bad Luck Brian just can’t catch a break. Pig farming seems a safe enough business venture. You won’t have much competition, that’s for sure. But here comes Jesus, casting out demons left and right. When a particularly nasty group of demons asks to be cast into a herd of pigs, Jesus obliges. The demon pigs then toss themselves off a cliff.

Talk about a bad day for the pig farmer. For the full story, check out Matthew 8:30-32. Can you say face-palm? Remember that time when a well-meaning old lady tried to restore a beautiful fresco in church in Spain? The fresco, entitled Ecce Homo, or Behold the Man, depicts Jesus bound and crowned with thorns…or it did. Five years ago, 80 year old Cecilia Gimenez took at stab at restoring the old and flaking fresco, which she said was her favorite depiction of Jesus. Dear Cecilia sat down with some paints and a photo of the original artwork and came up with the, admittedly horrifying, face that you see above.

Sure, it should be common knowledge not to touch priceless artwork when you have no artistic training yourself. Still, she had the best intentions at heart and she did her best work. Ok, it’s bad. It’s really bad.

12. Hipster Jesus Loved you Before it was Cool Oh look, another hipster. Are we in Portland? I jest. But really, this is pretty amazing. Jesus arrived on earth thousands of years ago…poor and in the middle of nowhere. He lived his whole life just to die a horrific death. All of this so that he can wipe your record clean and spend eternity with you in heaven. What the what? Now how do you feel about that time you swiped a pack of sweet tarts from the gas station. Joking, joking!

Can I just say…Yeshua’s rocking those specs! Don’t you agree? I’m going to be really honest here. I just moved to a small town and our parish doesn’t offer coffee and donuts often enough. Not even close. I mean, who doesn’t love a good donut? Or a bad donut…I’m not picky. Really, though…donut days are an awesome way to stay connected with the people of your parish. I usually don’t pull aside old ladies or single dads for a chat after mass, but when we all stay to mingle over sugar and caffeine, something miraculous happens.

I have made so many unexpected friendships during these little parish get togethers. So next time you have the chance to enjoy a donut after mass, do it! Your thighs might not thank you, but your heart will. Too cheesy? Just get your donut and make an old lady’s day, you heathen. 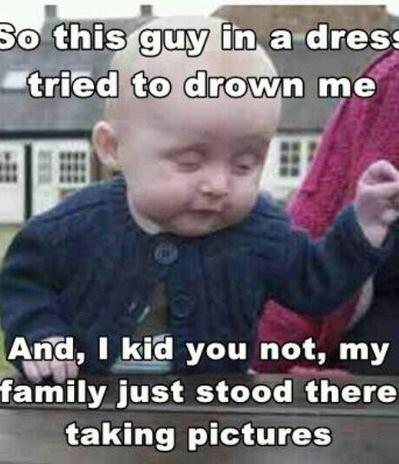 Sweet little Drunk Baby (yes, that’s actually what he’s called) always has a story to tell. I feel bad for kids at mass…they don’t how to tie their own shoes, let alone how to comprehend what’s going on at Church. Why do grown ups meet at the same place all at once and sit in uncomfortable chairs for an hour (aka forever and ever)? Why is there no running or playing? Why do they only get one bite of food? Mass is weird. Baptism is even weirder.

Babies get lubed up with oil, and have to deal with a stranger waving his hand around in their face. Not to mention, they are surrounded by a big group of people who they likely don’t recognize. The icing on the cake is when they are drizzled (or even dunked–gasp) in cold water. No wonder they cry their little hearts out. That’s a tough initiation when you’re just a little tot. St. Anthony renounced his fortune to live a life of poverty. He made a name for himself as a great preacher and his holiness was so profound that Pope Gregory IX canonized him only a year after his death. According to one story, St. Anthony was so inspiring and pious that even the fish gathered when he preached by the lakeside. After all that…we pray to him to find our keys. Not gonna lie, though, it sure feels good when you shoot up a quick prayer and find what you’re looking for right away. St. Anthony is nothing if not reliable, and there’s no one quite as worthy of a Success Kid meme. Somehow, somewhere, we let the world run with the false idea that the Church is anti-science.

Sure, there’s the whole Galileo thing, but a closer inspection of the Galileo affair shows that there’s a lot more to understand (check out this explanation by Tim O’Neill who is not a Catholic apologist).

The fact is, the Church’s history is filled with some of the world’s greatest scientists (many of whom were priests).

So yeah, we aren’t really anti-science. You may have heard the legend before, but it is said that St. Nicholas punched Arius (you know, the big-time heretic who denied the divinity of Christ) at the council of Nicea.

Of course, who could resist a story like that?

When we think of Santa, we think of red, bubbly, and friendly…not “I’m going to punch you in the face for misleading the flock!”.

What are some of your favorite memes or jokes? Add them in the comments below!